Sound It Out: Letter-Sound Correspondence. These games allow any word to immediately be available to students with the sound-letter correspondence available so they hear and see it as much as they like!

These phonics games are all based on VocabularySpellingCity’s revolutionary technology which enables student to hear and see the sound to letter patterns that are too often a major stumbling block to learning to read! You can pair these new games with our phonics word lists that target important phonics topics such as consonant blends, vowels, and digraphs.

Sound It Out: The Game

VocabularySpellingCity is broadly used in upper elementary grades (over 10% in the US!) and now has added Sound It Out, which strengthens our offering for primary grades. Sound It Out uses the Interactive Sound Boxes, a powerful learning tool invaluable to primary grade teachers and, not incidentally, to all levels of English Language Learners.

I’m writing about Sound It Out since it illustrates some of my deepest held beliefs about learning. Direct instruction plays a very minor role in student learning. Hands-on learning experiences and meaningful practice are far more important. The Sound It Out game is a rich skill-building exercise which puts interactive learning tools into students’ and teachers’ hands in an unprecedented way. Students can now, on any list of words that the teacher or student chooses, have rich phonological and phonics practice. Sound It Out breaks any word down into its sounds (phonemes) and then shows the letter-sound correspondence.

Students who are struggling to understand letter-sound correspondence can mouse over the sounds in their words to HEAR each sound and SEE which letter combinations make which sounds.

In terms of game play, Sound It Out starts is a sound-based unscramble game where students can choose from two scenes –  a version that features a fun cat and mouse and classic version geared toward older students.  But let’s focus first on the educational concept. Words on the selected list are automatically broken into sounds with corresponding letter combinations.  So if your list includes tooth, ship, sheep, chill, and this; each of these words would be used in the activity broken down by sounds:  t oo th,  sh i p, sh ee p, ch i ll, and th i s.  In the unscramble part for each word, the student must reassemble the word based on its sounds. This encourages the student to focus not only on the spelling of the word, but on the sounds each letter (or letter combination) makes.

Here’s an example with the word “black”. The word is broken down into its four sounds: b l a ck and then the order is scrambled. The student hears: “Click on the sound blocks in the right order to spell the word: black.” Students also have the option to hear the word read again or and in a sentence.

Here’s the part of the game that I feel is most magical. After the student has successful assembled the sounds of the word, the letter tiles transform into the the word fully assembled but still broken down into phonics tiles. The word is read aloud again and sounded out, with each Interactive Sound Box being highlighted for the sound being read. The student can also mouse over each sound to highlight the Interactive Sound Box while listening to the pronunciation. These interactive phonics boxes are a powerful tool for students trying to learn to recognize the sounds and then match them with the letter combinations.

Lets look for a second at these VocabularySpellingCity interactive sound boxes.  Click to play Sound It Out and get a feel for how it puts the ability to explore sound letters combinations in the students’ hands. You can do it on your computer, tablet, or phone.

While I have focused on Sound It Out for primary students that are learning letter sounds and phonics, it is also useful students learning English.

For English Language Learners, Sound It Out is exceptionally useful.  As background, we all know that one of the challenges for ELL students is mastering the phonological skills of distinguishing the sounds (both for hearing and for speaking) that exist in English but not in their original languages. For instance, native Spanish speakers need to learn to distinguish the English /v/ from the /b/ sound.  Other English sounds that are difficult for native Spanish speakers include the /l/ sound, the short /i/, and the /ch/ sound. But with Sound It Out, these tough sounds can be listened to and practiced, sound by sound, giving them the power to pursue proficiency.

These interactive sound boxes are based on a novel technology developed by VocabularySpellingCity. It is a patent pending technology called “Phoneme-to-grapheme mapping systems and methods.”

The high-power at low-cost of this framework is ground-breaking: other vendors sell a similar capability but only for the words that they’ve analyzed, not for a large library of words and they price it at a whopping $25 to $50 per student per year, VocabularySpellingCity provides it at $2.25 per student per year (for schools).

Primary Grade Activities – I’ve been asked to add a quick overview of what activities use these Interactive Sound Boxes and more generally, what activities the primary grade teachers should focus on. 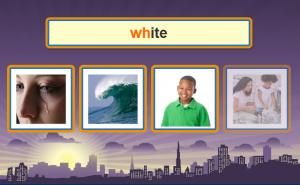 Activities with pictures for many of the words: FlashCards, Word Study and TeachMe More. 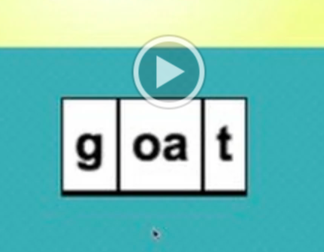 One thought on “Building Phonological, Phonics, and Early Reader Skills”